Playout has always been an important pillar of our solutions portfolio from day one. The playout solutions are available as Live Production PCR (just:live) and 24/7 Automated MCR playout (just:play) variants, and share our template based real-time graphics capabilities. just:live was designed to meet the fast-paced, time-critical demands of Live TV broadcast, including news, sports, talk shows and live events, whereas just:play was designed to meet the automated 24/7 broadcast playout demands of TV stations, with state-of-the-art scheduling that can be planned and executed weeks in advance, live input switching, automatic Gaps and Overlays detection and the support for redundant playout scenarios. Given its industry-standard client-server architecture, our robust playout real-time core engine – just:out – is designed to handle live as well as continuous 24/7 playout without interruption, combining top-notch usability and industry-standard system reliability. From the licensing perspective a maximum of 7 video layers, 7 FX layers of real-time graphics and 3 events layers (to accommodate external triggers) can be added additionally to the base license. Amongst many usability improvements and stability enhancements that will benefit daily operations, version 3.1 of just:live and just:play feature full SDK and UHDp60 playout support for qualified AJA and Blackmagic Design devices and introduces just:control as the new main user interface to unify the control user interface for both ingest and playout solutions.

Full compatibility support for Apple Silicon based M1 Macs is part of an upcoming version once all third-party components will be officially available from the respective vendors.

Our development team is working hard to ensure feature-parity with former versions and we would kindly ask you to get in touch with either Peter or Manuel before upgrading to version 3.1 for new and especially existing customers.

This software requires macOS Catalina (macOS 10.15.x) or macOS Big Sur (11.x) and Intel based Macs only!
MacPro5,1 is not supported anymore and this is the last version which support Macmini6,2 and Macmini7,1

Using a device from BMD for play-out you MUST run just:out and just:control on separate machines, otherwise audio dropouts will occur while generating the Poster Frames or while working on Finder level.

Based on the success of our stand-alone solutions, we have remained true to our "TV Channel in a Box" philosophy and have worked on the further development of our combined MCR and PCR workflow solutions, which combine ingest and playout on one machine while controlling both application instances via our unified user interface just:control. Our team is happy to discuss your requirements and propose a tailored solution that builds on existing software components thus offering a future-oriented investment protection.

just:play/live version 3.x and just:in multi version 5.0 can now run on a single mac, sharing the same Blackmagic Design video device. Combined with the xMac mini Server rackmount enclosure from Sonnet Technologies and Apple’s Mac mini (Intel now and M1 to follow), this compact MCR solution is the perfect fit to run a single playout channel (video + graphics) including live-input and one ingest channel on the same hardware. All controlled by our new unified user interface called just:control to provide the best user experience. 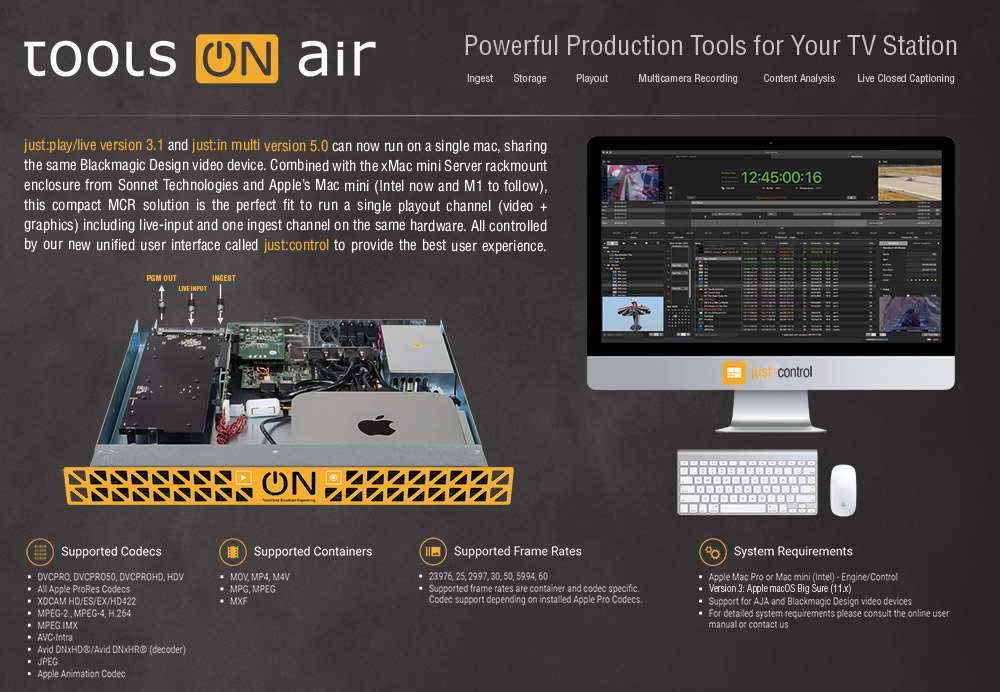